Lebanon’s interior minister has said the country’s police intelligence played a major role in foiling an alleged plot to bring down an Emirati passenger plane flying from Sydney to Abu Dhabi.

Nohad Machnouk told reporters on Monday that four Lebanese-Australian brothers, including one who is in detention in Lebanon, had planned to blow up the plane with bombs hidden inside a large Barbie doll and a meat grinder.

He said the bombs had not made it on to the plane because the handbag they were in was 7kg above the weight permitted by the airline.

Machnouk said the bombs had been sent back to the would-be attacker’s home in Australia. He said the attacker had tried to bring two explosives on the plane in case one of them did not work. The second was to be detonated by one of the brothers who was supposed to be the suicide attacker. It was not immediately clear how authorities uncovered the alleged plot.

Australian authorities said late last month that they had thwarted a credible terrorist plot to down an airplane by smuggling a device on board but provided few details, including the precise nature of the threat or any airlines involved.

On Tuesday Australia’s transport minister, Darren Chester, who has primary responsibility for airports, was reluctant to confirm the statements by the Lebanese interior minister.

“The bottom line is we work very closely with our security partners around the world,” Chester told Sky News.

“It’s a team effort in the sense that we do need to share information, because the threat of terrorism crosses international boundaries.

The United Arab Emirates’ national airline said it was working with Australian police in the investigation. But Etihad Airways, the smallest of three long-haul Gulf carriers that fly to Australia, refused to confirm if it had been targeted.

This month Australian police said two men had been charged with terrorism offences in Australia in connection with an alleged plot to bring down the airplane. It was not immediately clear if they were two of the four brothers.

Four Lebanese-Australian men have been arrested by police, who also reportedly seized a meat grinder that investigators thought may be the basis of a bomb. One of the four was released later without charge.

Machnouk said two of the brothers, Khaled and Mahmoud Khayyat, were being held in Australia, while another, Tarek, was a senior member of the Islamic State group based in the northern Syrian city of Raqqa.

He added that the fourth brother, Amer, was supposed to be on board the plane, working to bring it down 20 minutes after takeoff, but was arrested in Lebanon after he arrived in mid-July from Australia.

Machnouk said the alleged plot had been “foiled because of the extra weight”.

“Intelligence branch followed on the case and found that Amer was involved in this act and it appears that he was supposed to carry it out,” he said. 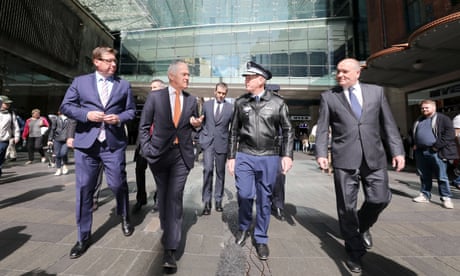 The minister said Lebanese police had been tracking Tarek Khayyat’s brothers since he moved to Raqqa and became an Isis commander.Machnouk said Amer Khayyat had travelled between Australia and Lebanon several times under pretexts such as coming to get engaged or get married.

He said about 400 passengers had been on the plane, including 120 Lebanese and that the four brothers wanted to punish the UAE and Australia for being part of the US-led coalition fighting Islamic State.

“When four Lebanese brothers in Australia decide to blow up an Emirati jet this means that the whole world should work together to fight terrorism,” Machnouk said. “Coordination should be 24 hours a day between all security agencies to stop such attacks.”

… we have a small favour to ask. More people are reading the Guardian than ever but advertising revenues across the media are falling fast. And unlike many news organisations, we haven’t put up a paywall – we want to keep our journalism as open as we can. So you can see why we need to ask for your help. The Guardian’s independent, investigative journalism takes a lot of time, money and hard work to produce. But we do it because we believe our perspective matters – because it might well be your perspective, too.